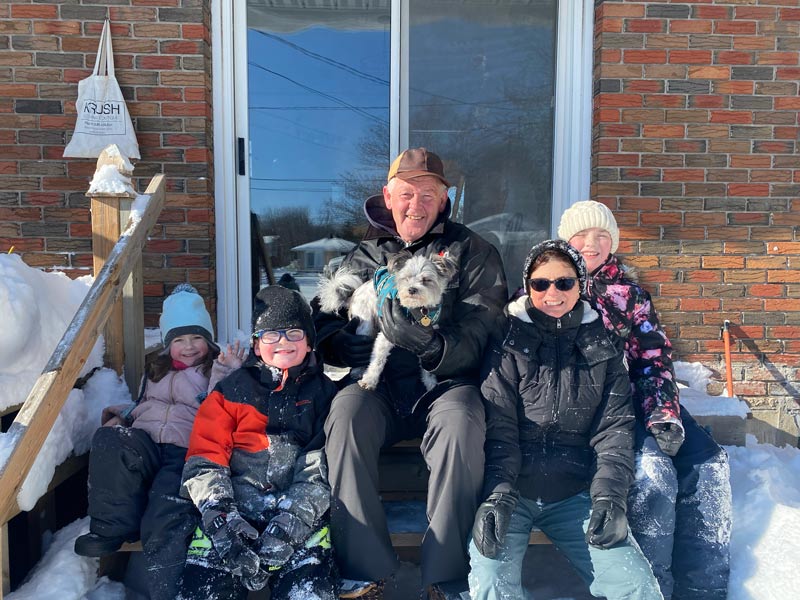 How I Got Here………by Vernon Bailey

I’ve been asked to share with you my auction story.  How it came about that I have laboured at this vocation for going on 35 years.  It was never an occupation that I aspired to in my younger years. Auctioneering never crossed my mind as something that might even interest me in the first three decades of my life.  So, what happened to get me to this point of being successful at what has turned out to be one of the most enjoyable and fun professions a person could ever be involved in?

Though I have not yet reached my biblically allotted three score years and ten, (even though from the seat where I now sit I can see it on the not too distant horizon), do not expect great words of advice from an old sage on how to become an auctioneer.  My rise up the bid calling ranks came about by fluke and old fashion good luck.

Growing up on a small farm in Northern Ontario, a love for the land and farming sprouted in the inner workings of my being.  A farmer was all I really wanted to do, or be. The only auction sales I ever attended were the ones involving cattle.  The only cattle sales that happened in our area occurred three times a year near the town of Thessalon, Ontario.  These sales were managed by a group of local farmers under the name Algoma Livestock Co-op.  The Cooperative had been formed in the 1950’s as a means for local farmers to have better control of the marketing of their livestock.  Most sale day workers were local farmers or their children.  Unloading the trucks, feeding the four-legged beasts, grading and weighing cattle, and running them from their pens, to the sale ring and back, were just a few of the jobs necessary in making it a beneficial endeavour.  In the early 1980’s I started working on sale days.  My job was to deliver sale tickets to the successful bidder after the auctioneer had said sold.  In those days the buyer had to sign the ticket acknowledging that they had purchased that particular lot for the recorded price.  I then would return the ticket to the sale clerk.

A Ringman, acting as a second set of eyes for the auctioneer, was always a valuable asset.  One year a new auction school graduate asked if he could work the sale as a Ringman.  Simply put, he was terrible.  He missed bids and offered no enthusiasm when he did finally see the nod of a head or the twitch of a finger.  Bidders and auctioneer were growing more and more perturbed.  So, seeing how I was already in the ring I started yelling out as I noticed a bidder.  After the sale the Co-op Secretary approached me and said, “You did a good job ringing and we’d like you to do that at the sales from now on”.  After that, I became the cattle sale Ringman, with never a thought given to someday taking the mic into my hand.  Then, for about five years, three times a year, I would holler my self hoarse while avoiding bovines circling the sale ring.  In those days the auctioneering duties were performed by two different fellows. The major sale in September was conducted by a out of town professional from New Liskeard.  The other two were called by an aging local auctioneer, Charlie Wilmot.  Charlie was in his mid to late 70’s by this time and was prone to blackouts as he auctioned.  So any sale he was doing shut down for five or ten minutes when one of these spells occurred.  This was not received well by the cattle sale hierarchy.  As you can well imagine, pace is an important part to any auction but especially true when selling cars or cattle.  During one of those blackouts from the sale ring, I made a feeble attempt at finishing selling the lot of cattle that had been encircling the ring but were now, like

the rest of us, somewhat subdued.  As I struggled to get at least this current group of steers out of the way, Charlie gradually came to and was able to finish the sale.  However, as far as the Cooperative’s Board of Directors were concerned, this could never happen again.

Enter Mr. Larry Ritchie, the local Department of Agriculture Rep.  His concern was for the agriculture community as a whole.  Since Mr. Wilmot was the auctioneer of choice in Algoma and the only one with agricultural background, the Ag Rep felt it imperative that someone with a knowledge of farming be found to replace this aging bid caller.  He started inquiring at different farm gatherings to see if maybe there was a younger person in the community willing to go to auction school.  The then secretary of the Algoma Livestock Co-op suggested I might be interested.  I was then asked if I was interested and that was the exact moment the thought crossed my mind that maybe this was something I could try.  Contacting Mr. Ritchie to say I had some interest got the ball rolling. He found an auction school and arranged 50% funding for me to attend, found out the dates of the next class session and gave me a call.  In March of 1987 I headed off to Woodstock, Ontario to The Southwestern School of Auctioneering.  It was here that great instructors such as Bert Pepper, Frank Stapleton, Glen Murray and Dan Murray unleashed a love for a profession that has been overwhelmingly good to me.

I came home from that school on a Sunday, called aging auctioneer, Charlie Wilmot, told him I had gone to auction school and if he ever needed a hand to give me a call.  He said, “I have a sale this coming Saturday at the Laird Hall.  Why don’t you come to that?”.  Needless to say, I was there.  For the next two to three years Charlie had me come to his auctions.  He never had a fainting spell while auctioning during that time.  He sold into his 80’s and gradually started telling people to call Vernon – and the torch was passed!

The passion for “The Show” still burns in me, even though Covid has tried it’s best to douse the flame.  Cattle sales have stayed as live events throughout this time, which has been fun.  Car auctions have been a hybrid of the live auction, but at least I still got to keep my chant in shape, looking forward to reading a bidder’s eyes as they wait for their prize to hit the block, extracting one more nod from the head that just wagged no and looking forward to the fun of the live auction sale.  It’ll be back – it has to – for that’s what keeps this old auctioneer young.